Be sure to check out my new session, vAmethyst 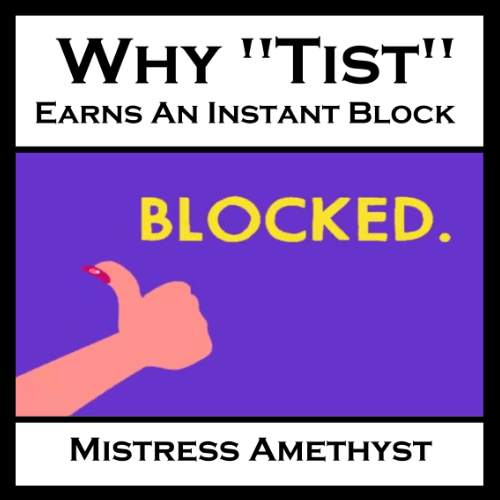 The Explanation & Answers You’ve Been Asking For

If you follow me on Twitter, you’re probably well aware that using the word “tist” will get you instantly blocked.  But perhaps, you’re not sure why I have such strong adverse reactions to that word.  Or maybe you’ve just stumbled across my path and you’re learning more about me, my likes, dislikes, etc.

For the next few paragraphs, I’ll guide you through the details.

Let me begin with a warning.  What I’m about to reveal is embedded in strong emotion and disgust, to be quite honest, and it might be offensive to some.  Please read with an open, empathetic mind.

If you want a quick summary, here it is:

Reason number 1 why I hate the word “tist” – The gross display of non-consensual role play.  I assume that if someone uses the word “tist”, they probably come from the subset which repulses me.  Therefore, it earns an instant block

Reason number 2 why I hate the word “tist” – It’s a rude and derogatory word for hypnotist, implying that the individual is an amateur.  I didn’t work my ass off to receive my CHt, ACH, CHBE, and specialties in numerous areas of hypnotherapy to be downgraded to a “tist”.  No thank you!

MY INTRODUCTION TO “TIST”

First of all, let me explain what the word “tist” refers to.  Quite simply, it’s a shortened word for hypnotist.  That might seem innocent to an outsider, but it’s not.  Not to me, anyway.

My first encounter with the word “tist” started in 2012, in a small hypnosis community called Hypwatch.  I was fresh on the fetish scene and was looking to make a name for myself.  If there was a community for hypnosis, I wanted to explore it.

I signed up, created my profile name, and within approximately 3 minutes, I already had an instant message from someone.  Wow!  Impressive.  “This must be an active community”, I thought.

Very quickly the content of the instant message turned very dark, and to be quite honest, weird.  The guy became frantic and was messaging quickly about a female Hypwatch friend of his, who had been “taken over” by another hypnotist, and he wanted me to help free her.

“Huh?  Have I been sucked into a video game plot?”, I wondered.

Having come from a clinical hypnotherapy career, I tried to calm him down, dispel the myths about hypnosis, and assure him that it wasn’t possible to be “taken over” in the way that he was describing.

He argued that she had been so transformed that her personality changed completely, she stopped speaking to her family, along with many other descriptions that I knew couldn’t happen because of hypnosis.  He kept insisting that this hypnotist was messaging her and putting her into a trance, against her will, and she was unable to break free.

WARNING BELL – Ding Ding Ding.  This absolutely can not happen, and I started to suspect that this was some sort of subset to the fetish.

The next four to five instant messages from other HypWatch members confirmed that suspicion.  Each had a story and a dire warning that there were evil “tists” floating around, slipping into direct messages, and taking minds away from people, against their will.

If you search the word “tist” on Twitter, you’ll find similar role play stories, and loads of dire warnings about evil “tists” trying to insert their evil onto you through non-consensual hypnotic typed messages.

This is total bullshit.  What was being described to me, can’t happen.  What I was witnessing was a gross display of something that I loved;  hypnosis.  True, authentic hypnosis.  How could they turn it into this role play nonsense?  I was repulsed.

Therefore, whenever I see anyone use the word “tist”, I assume that they are an active member in that roleplay subset, which I want no part of.  It will earn someone an instant block.

“Tist” implies that they aren’t worthy or experienced enough to be called a hypnotist, so the word has been shortened to convey that the individual is an amateur.  I’ve never met a professionally-trained hypnotist, nor hypnotherapist, who is comfortable in being called a “tist”.  I feel safe in assuming that most “tists”, if not all, are untrained amateurs.

There are many “amateur” hypnotists, without a formal certification, who are excellent in their craft and are practicing the hypnosis fetish ethically.  If they are called a “tist”, I find that insulting, also.

When I received my CHt (Certified Hypnotherapist), I completed a year of schooling and 500 hours of practical experience.  If you’re not aware of what practical experience means, think of it like homework.  I had to complete 500 hours of hypnotherapy sessions, while in training.  This meant I had to recruit friends, family, friends-of-friends, neighbors, and fellow students to help me complete my practical requirement.  This aspect of the training required that I document details each session, have the subject sign off, and provide their contact information for verification.  Some of the training even required that I record the session on audio-tape, and submit it to my instructors, along with the normal written documents.  It was a rigorous training program.

I continued my training in the advanced program and received my ACH (Advanced Clinical Hypnotist), CHBE (Certified HypnoBirthing Educator (TM)), and I became a specialist in a long list of areas.  Some of which are:  Forensic Hypnosis Specialist, Specialist In Grief and Recovery, Specialist In Past Life Regression, Specialist In Cell Command Therapy (TM), etc.

After I finished hypnotherapy school, I received a job as a hypnotist at a clinic, which was owned by a fellow student, who graduated a year before me.  In this clinic, we received referrals from psychologists and doctors.  We spent our free hours learning more about the mind, hypnosis, NLP, relationships, and anything/everything that would help us to become better hypnotists.

So when someone refers to me as a “tist”, I take great offense to it, and it will earn an instant block.

Thank you for taking the time to read this blog, and I hope it brings you a better understanding on what the implications are, and why the word “tist” can be quite offensive.

If you are new to the hypnosis fetish, and merely thought “tist” was just the cool lingo, I hope this blog will help you create better relationships with the hypnotist of your choice.  If you’re in the habit of using “tist”, but would like discontinue using that word, here are some very easy words to use instead:

Thank you for reading this blog.  Now do me a favor.  Stop using that vile word, and show some appreciation for your Hypnotist of choice.  They’ve worked hard to achieve the skill that you so enjoy!  xoxo